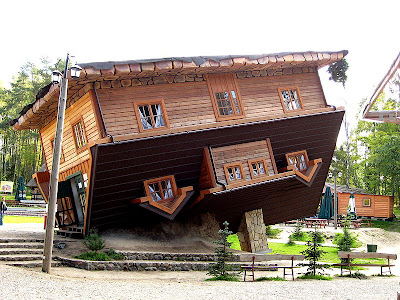 Located in the town of Szymbark, Poland, this magnificent piece of architecture was conceptualized by the owner, Daniel Czapiewski.
Due to its unique design, it attracts thousands of tourists keen to see this bizarre specter. The house is a normal conventional double storey wooden house literally inverted upside down with the roof touching the ground.
In this scenario, we can see how an Architect’s decision during the design process can have a profound effect on the commercial viability and profitability of a building. In this case, the design uniqueness attracts thousands of tourists to the site every year. The designer modified the conventional house and put it upside down .The cost of putting up such a house is relatively the same as for putting up a house the same size and design on the right –side up. The cost-benefit of putting up the house up-side down far outweighs the opposite i.e. if the house was conventional. Just imagine-if the house was the right-side up, no tourists would have visited it and the tiny village of Szymbark would not have found its place on the map.
The use of wood for construction eases the flexibility in constructing the house at a few degrees slant. Wood is also light in weight hence easier to suspend and cantilever. From the pictures, notice that the curtains also open upside down to emphasize on the up-side down effect. The suspended cantilevered side also helps to drum in this effect, with the chimney used cleverly to act as support to the ground. Bituminous felt is used as a flat roof on top.
This house will forever be etched in the minds of many and will be true testimonies on how creativity can increase a thousand-fold the commercial viability of Real Estate at no extra cost.