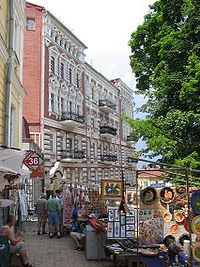 The Andriyivskyy Descent begins on the summit of the Starokyivska Hora (Old Kiev mountain) near the ornate late-baroque Saint Andrew's Church (which gave the street its current name). The street continues on down and descends to the Podil district were it ends at the Kontraktova Square. In the past times, the descent was known as Borychiv Descent mentioned as "Боричев увоз" (Borichev uvoz) by Nestor the Chronicler in his Primary Chronicle and in the 12th century poem, The Tale of Igor's Campaign (Slovo o polku Ihorevim).[6] The descent's current name is derived from the 18th century, at the time when the Saint Andrew's Church was erected atop the hill.
In the 18th and 19th centuries, the street was mainly inhabited by merchants and craftspeople.[2] Although they are long gone due to the sweeping demographic changes[7] in Kiev during times of the late Russian Empire and the Soviet Union, the street is once again thriving thanks to its unique topology, architecture, rich history and also many gift shops and small art galleries showcasing various paintings and sculptures by Ukrainian artists. The descent is one of the favorite spots for Kievans and tourists alike.[2] It is also notable for the many festivals it holds, including various art festivals[2] and the Kiev Day celebrations on the last weekend of May.[8]
The street's location in the city and its landmark attraction has made it lately a highly prestigious area, with several new luxurious restaurants. However, the descent's sewer and water systems have not been changed within the past 100 years, thereby underlining the need for a new system to be installed.[9] Although, city authorities have not yet scheduled a new sewer project system to be installed.[9]