The History of Pysanky 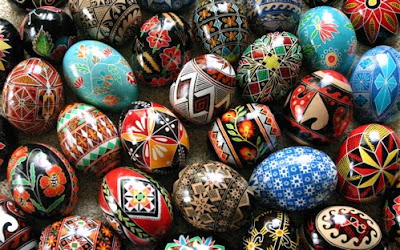 The art of the decorated egg in Ukraine, or the pysanka, probably dates back to ancient times. No actual ancient examples exist, as eggshells are fragile.
As in many ancient cultures, Ukrainians worshipped a sun god (Dazhboh). The sun was important - it warmed the earth and thus was a source of all life. Eggs decorated with nature symbols became an integral part of spring rituals, serving as benevolent talismans.
In pre-Christian times, Dazhboh was one of the main deities in the Slavic pantheon; birds were the sun god's chosen creations, for they were the only ones who could get near him. Humans could not catch the birds, but they did manage to obtain the eggs the birds laid. Thus, the eggs were magical objects, a source of life. The egg was also honored during rite-of-Spring festivals––it represented the rebirth of the earth. The long, hard winter was over; the earth burst forth and was reborn just as the egg miraculously burst forth with life. The egg, therefore, was believed to have special powers.
With the advent of Christianity, via a process of religious syncretism, the symbolism of the egg was changed to represent, not nature's rebirth, but the rebirth of man. Christians embraced the egg symbol and likened it to the tomb from which Christ rose. With the acceptance of Christianity in 988, the decorated pysanka, in time, was adapted to play an important role in Ukrainian rituals of the new religion. Many symbols of the old sun worship survived and were adapted to represent Easter and Christ's Resurrection.
In modern times, the art of the pysanka was carried abroad by Ukrainian emigrants to North and South America, where the custom took hold, and concurrently banished in Ukraine by the Soviet regime (as a religious practice), where it was nearly forgotten. Museum collections were destroyed both by war and by Soviet cadres. Since Ukrainian Independence in 1991, there has been a rebirth of the art in its homeland.