If you spend time in Budapest, at least a part of it should be at the soothing thermal spring baths. The Romans reaped the health benefits of hot springs here, but it was during the 16th- and 17th- century Turkish occupation that the bath culture was developed. Some of these spas are still in operation today. 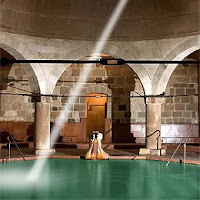 But there is an array of baths from more recent Hungarian times, such as the wonderful Art Nouveau Gellért Baths at the luxurious Gellért Hotel. And the Lavish Széchenyi Baths in the City Park. You will also find plenty of thermal hot springs and wells throughout Hungary. There are nearly 1,000 of them in the country, spewing in towns such as Bük, Balf, Gyula and Hajdúszoboszló.
The Romans first developed the baths of Budapest, and the Turks and Habsburgs followed suit. The thermal lake at Heviz is probably Hungary’s most impressive spa , though public thermal pools at Budapest, Eger, Gyor, Harkany and Szeged.
Budapest is a major spa centre with numerous thermal baths that are open to the public. Here the Danube follows the geological fault separating the Buda Hills from the Great Plain and over 40 million litres of warm mineral water gush forth daily from more than 100 thermal springs.