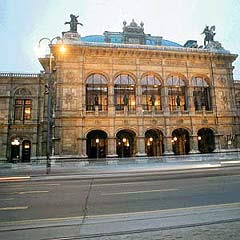 The Viennese Opera House is without a doubt one of the leading opera houses of the world and has been through a lot during its “life”. Certainly, lots of the big opera stars have played here. The history has a tragic beginning as the construction of monumental building of the “Ringstraße’” became a calamity for its two architects. 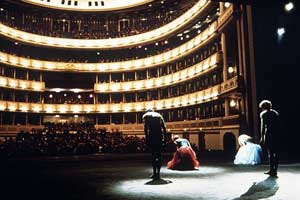 Due to deep foundation, the building resembled a “sunken crate”. Such criticisms finally made Eduard van der Nüll commit suicide and two months after August von Siccardsburge died of a heart attack. Unfortunately they did not live to see the big opening with “Don Giovanni” in 1869. The imposing building is characterized through its “Renaissance elbow style”. 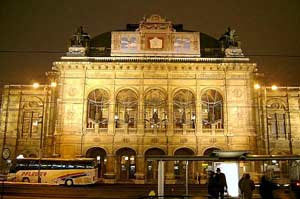 A central tract with a huge loggia leading to the “Ringstraße”, a transversing set of wings, a domed roof over the stairs, an auditorium and a stage. After the war the Opera House was rebuilt with many additions and reopened to “Fidelio”. The new auditorium accommodates 2,200 seats and standing places. Significant details of the building are the loggia, with its allegories in the arcades, the wall paintings, and the imposing staircase with the statues of the seven Free arts, made out of marble. The Schwind Foyer, the Gobelin Hall and the Marble Hall among other things make the Opera House very unique. In addition, the stage area covers a gigantic 1.500 m².