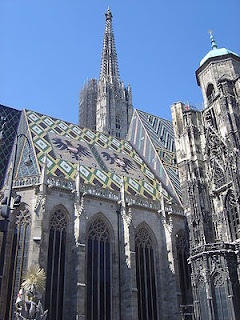 St. Stephen's Cathedral is the mother church of the Archdiocese of Vienna and the seat of the Archbishop of Vienna, Christoph Cardinal Schönborn, OP. Its current Romanesque and Gothic form seen today, situated at the heart of Vienna, Austria in the Stephansplatz, was largely initiated by Rudolf IV and stands on the ruins of two earlier churches, the first being a parish church consecrated in 1147. As the most important religious building in Austria's capital, the cathedral has born witness to many important events in that nation's history and has become one of the city's most recognizable symbols.
Alice
from http://en.wikipedia.org/wiki/St._Stephen%27s_Cathedral,_Vienna
Posted by T2 at 11:54 PM