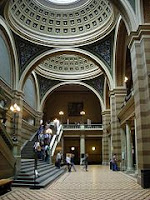 Sweden has one of the best education systems in the world. Children aged 1–5 years old are guaranteed a place in a public kindergarten (Swedish: förskola or, colloquially, dagis). Between the ages of 6 and 16, children attend compulsory comprehensive school. Swedish 15-year-old pupils have the 22nd highest average score in PISA assessments, being neither significantly higher nor lower than the OECD average. After completing the 9th grade, about 90% of the students continue with a three-year upper secondary school (gymnasium), which can lead to both a job qualification or the entrance exam to university. The school system is largely financed by taxes. The Swedish government treats public and independent schools equally by introducing education vouchers in 1992 as one of the first countries in the world after The Netherlands. Anyone can establish a for-profit school and the municipality must pay new schools the same amount as municipal schools get. School lunch is free for all students in Sweden, which usually includes one or two different kinds of hot meals, a meal for vegetarians, salad bar, fruit, bread, and milk or water for drink. Some schools, especially kindergartens and middle schools, even serve breakfast for free to those who want to eat before school starts.
http://en.wikipedia.org/wiki/Sweden Cathy
Posted by T2 at 11:44 PM