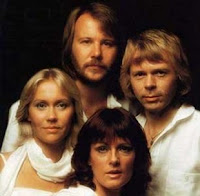 ABBA was a pop music group formed in Sweden in November, 1970. The band consisted of Anni-Frid Lyngstad (Frida), Björn Ulvaeus, Benny Andersson and Agnetha Fältskog. They topped the charts worldwide from 1972 to 1982. The name "ABBA" is an acronym formed from the first letters of each of the group members' given names (Agnetha, Björn, Benny, Anni-Frid), and the group took this name officially in late 1973.[1] The group's name is officially trademarked with the first "B" reversed.
ABBA gained international popularity employing catchy song hooks, simple lyrics, and a Wall of Sound achieved by overdubbing the female singers' voices in multiple harmonies. As their popularity grew, they were sought after to tour Europe, Australia, and North America, drawing crowds of ardent fans, notably in Australia. Touring became a contentious issue, being particularly unpopular with Fältskog, but they continued to release studio albums to great commercial success. At the height of their popularity, however, both marriages of the band members failed, and the relationship changes were reflected in their music, as they produced more thoughtful lyrics with different compositions.
They remain a fixture of radio playlists and are one of the world's best selling bands, having sold near 400 million records world wide;[2][3] they still sell two to four million records a year.[4] ABBA was also the first pop group from mainland Europe to enjoy consistent success in the charts of English-speaking countries, including the United Kingdom, the United States, Canada, Ireland, South Africa, Rhodesia, Australia and New Zealand. Their enormous popularity subsequently opened the doors for other Continental European acts.[5]
The music of ABBA has been re-arranged into the successful musical Mamma Mia! that has toured worldwide and had a movie version released in July 2008. All four of the former members of ABBA were present at the Stockholm premieres of both the musical (2005) and the film (2008). The film première took place at the Benny Andersson-owned Rival Theatre at Mariatorget, Stockholm on 4 July 2008. A new museum devoted entirely to the pop supergroup was scheduled to open in Stockholm in 2009, but the project was postponed as of September 2008.
from:http://en.wikipedia.org/wiki/ABBA