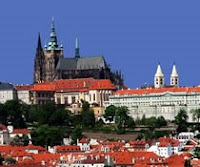 Prague Castle is the largest medieval castle complex in Europe and the ancient seat of Czech kings throughout the ages. It is Prague's premier tourist attraction.
Several destructive wars and fires (and the subsequent renovations), along with differing political forces have combined to create an intriguing mix of palaces, churches and fortifications.
The Prague Castle complex consists of Saint Vitus Cathedral (the most recognisable landmark in the city), viewing towers, museums and art galleries, a monastery, Golden Lane, several palaces, including Lobkowicz Palace, and St. George's Basilica; the latter being a popular venue for early evening classical concerts.
The first known building on the site of Prague Castle was erected in the 9th century. In the 12th century it was replaced by a Romanesque palace. In the 14th century it was rebuilt in the Gothic style, under the reign of Charles IV.
A further reconstruction of the Royal Palace then took place under the Jagellons at the end of the 15th century.
Following a fire in 1541, Prague Castle underwent further works. The Spanish Hall was added during the reign of Rudolf II. And final alterations were made by Empress Maria Theresa, under the direction of the celebrated architect M. Pacassi.
After World War I, renovations to the castle buildings and to the Prague Castle Gardens were undertaken by the architect J. Plecnik.
Today, Prague Castle is the seat of the President of the Czech Republic and serves as the historical and political centre for both city and state.
The Changing of the Guard at the front gates takes place every hour. At noon the ceremony includes a fanfare.
from http://www.pragueexperience.com/places.asp?PlaceID=601
Alice
Posted by T2 at 7:56 PM