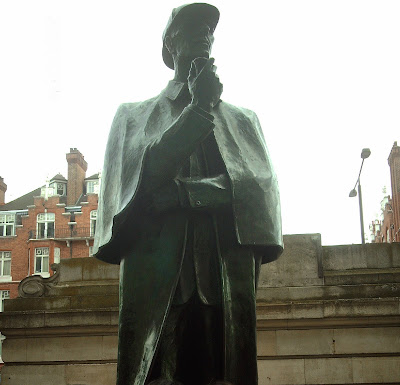 There can be no doubt that the most famous detective know on earth is Sherlock Holmes! Sherlock Holmes and Doctor Watson lived at 221b Baker Street between 1881-1904, according to the many stories written by Sir Arthur Conan Doyle, and you can now visit his famous study overlooking Baker Street at the Sharlock Holmes Museum. In "The Headed League," Holmes remarks to Watson, "It is a hobby of mine to have an exact knowledge of London." So, let's take a look at London through the eyes and times of Sharlock Holmes... Over the years, many businesses along Baker Street have tried to create a connection with the detective and Holmes's fictional address 221b Baker Street. Some businesses such as the dry cleaner's and a bank have even posted "historical plaques" on their properties not fa from the Baker Street Underground station. You may find it strange that visitors stand there, looking at the imaginary address of an imaginary person! However, Sherlock Holmes has taken on a reality that very few other fictional characters have.
The Sherlock Holmes Museum has a full-time employee answering 40 to 100 letters and requests a week addressed to Sherlock! The Museum's souvenir shop is the largest shop in the world specialising in Holmesian items such as walking sticks, deerstalker hats, pipes, chess sets and hundreds of other items. Holmes's 221b Baker Street is perhapsmore famous than another London address, No.10 Downing Street. When you first arrive in Sherlock's "area" at Baker Street station, you notice many pictures of him smoking his famous pipe on the walls, but wait until you get outside, where a nine-foot bronze statue will welcome you!(The picture above!! I took it when I went to London!!!XD) This statue of Holmes was put up in September 1999, decades after it was first suggested. If you walk around central London, you will find many of the places mentioned in the stories and will almost believe Sherlock and Watson were real! For example, opposite the Eros statue in Piccadilly Circus is the Criterion Bar, where Watson first heard Sherlock's name mentioned. Watson heard he was an eccentric man, studying at St. Bartholomew's Hospital, who needed a roommate. Then walk on to the Charing Cross Hotel and you can stand near the spot where Holmes caught a spy, where Watson banked and where, just across the street, they sent off urgent telegrams. Therefore , although we think of Baker Street when we think of Holmes, you might actually find him hiding around any corner in London!
...all typed by Vineeta!!!
Posted by T2 at 1:29 AM