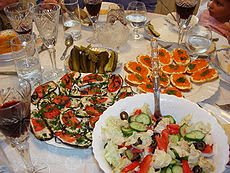 Russian cuisine derives its rich and varied character from the vast and multicultural expanse of Russia. Its foundations were laid by the peasant food of the rural population in an often harsh climate, with a combination of plentiful fish, poultry, game, mushrooms, berries, and honey. Crops of rye, wheat, barley, and millet provided the ingredients for a plethora of breads, pancakes, cereals, kvass, beer, and vodka. Flavourful soups and stews are centered on seasonal or storable produce, fish, and meats. This wholly native food remained the staple for the vast majority of Russians well into the 20th century.
Russia's great expansions of territory, influence, and interest during the 16th-18th centuries brought more refined foods and culinary techniques. It was during this period that smoked meats and fish, pastry cooking, salads and green vegetables, chocolate, ice cream, wines, and liquor were imported from abroad. At least for the urban aristocracy and provincial gentry, this opened the doors for the creative integration of these new foodstuffs with traditional Russian dishes. The result is extremely varied in technique, seasoning, and combination.
From the time of Catherine the Great, every family of influence imported both the products and personnel - mainly German, Austrian, and French - to bring the finest, rarest, and most creative foods to their table. This is nowhere more evident than in the exciting, elegant, highly nuanced, and decadent repertoire of the Franco-Russian chef. Many of the foods that are considered in the West to be traditionally Russian actually come from the Franco-Russian cuisine of the 18th and 19th centuries, and include such widespread dishes as Veal Orloff, Beef Stroganoff, Chicken Kiev, and Sharlotka (Charlotte Russe).