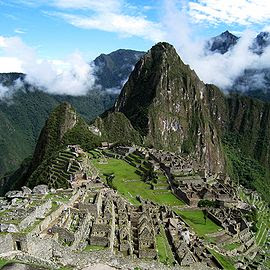 Often referred to as "The Lost City of the Incas", Machu Picchu is one of the most familiar symbols of the Inca Empire.

The Incas started building it around AD 1430 but was abandoned as an official site for the Inca rulers a hundred years later, at the time of the Spanish conquest of the Inca Empire.

Machu Picchu was declared a Peruvian Historical Sanctuary in 1981 and a UNESCO World Heritage Site in 1983. Since it was not plundered by the Spanish when they conquered the Incas, it is especially important as a cultural site and is considered a sacred place.
For more information see: http://en.wikipedia.org/wiki/Machu_Picchu
-Teacher Karl
Posted by T2 at 9:32 PM