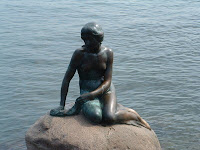 You know you're in Copenhagen when you see the Little Mermaid, a signature of the city. This famous symbol of Copenhagen sits close to the shore of Langelinie on her granite bolder, gazing towards the Copenhagen harbor entrance from the sound. It is about a 10 minute walk from the Langelinie Cruise Ship Pier, which is directly north of the Little Mermaid. If you wish to walk to see this life-sized lady, keep the water to your left as you leave the ship. Continue along the harbor and follow the signs. Shore excursions usually include a short stop at the Little Mermaid at the beginning or end of the tour.


The statue was created by the sculptor Edward Eriksen and was presented to the City of Copenhagen in 1913 by the famous brewer of Carlsberg beer, Carl Jacobsen. Although many think the statue is a symbol of the old seaport, the inspiration was Hans Christian Andersen's fairy tale, "The Little Mermaid."(wrote in 1837) In 1909 the founder of Carlsberg Breweries, who was fascinated by the story, had the statue built.On April 23, 1964, vandals decapitated the Little Mermaid and her original head was never found. A new head was made from the original cast. Most visitors to Copenhagen have their pictures made next to the Little Mermaid.


At less than five feet tall, the statue is much smaller than most people expect, and she sits on a rock near the shore, not in the middle of the harbor.

The Little Mermaid statue has sat on her boulder since August 23, 1913, but has had a very turbulent life, with at least eight vandalism attacks. She has been dowsed in paint numerous times, had her right arm amputated, been decapitated three times, and even pushed from her rock in 2003. Fortunately, the sculptor made a mold, so the Little Mermaid's "parts" have been reattached from the original mold.