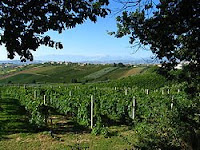 Italian wine is wine produced in Italy, a country which is home to some of the oldest wine-producing regions in the world. Etruscans and Greek settlers produced wine in the country long before the Romans started developing their own vineyards in the second century BC. Roman grape-growing and winemaking was prolific and well-organized, pioneering large-scale production and storage techniques like barrel-making and bottling. Two thousand years later, Italy remains one of the world's foremost producers, responsible for approximately one-fifth of world wine production in 2005.
Wine is a popular drink in Italy. Grapes are grown in almost every part of Italy, with more than 1 million vineyards under cultivation. In some places the vines are trained along low supports. In others they climb as slender saplings.
Most wine-making in Italy is done in modern wineries. However, villagers who make wine for their own use sometimes still tread the grapes with their bare feet, until the juice is squeezed out. They believe this ancient method still makes the best wine.
cathy / from http://en.wikipedia.org/wiki/Italian_wine
Posted by T2 at 10:01 PM