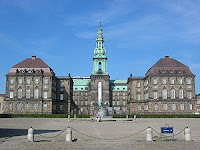 Christiansborg Palace, on the islet of Slotsholmen in central Copenhagen, is the seat of the Folketing (the Danish parliament), the Danish Prime Minister's Office and the Danish Supreme Court. Also, several parts of the palace are used by the monarchy, including the Royal Reception Rooms, the palace chapel and the royal stables.
The palace is thus the house of Denmark's three supreme powers: the executive power, the legislative power, and the judicial power. It is the only building in the world which is the home of all a nation's three supreme powers. Christiansborg Palace is owned by the Danish state, and is run by the Palaces and Properties Agency.
The present building is the last in a series of succesive castles and palaces constructed in the same site since the erection of the first castle in 1167. Since the early fifteenth century, the various buildings have served as the base of the central administration; until 1794 as the principal residence of the Danish kings and after 1849 as the seat of parliament.
The palace today bears witness to three eras of Danish architecture, as the result of two serious fires. The first fire occurred in 1794 and the second in 1884. The main part of the current palace, finished in 1928, is in the historicist Neo-baroque style. The chapel dates to 1826 and is in a neoclassical style. The showgrounds were built 1738-46, in a baroque style.
from:http://en.wikipedia.org/wiki/Christiansborg_Palace
Penny
Posted by T2 at 6:16 AM