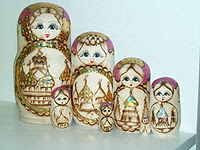 A matryoshka doll, also known as a Russian nested doll, is a set of dolls of decreasing sizes placed one inside the other. "Matryoshka" (Матрёшка) is presumably derived from the Russian female first name "Matryona" (Матрёна).
Matryoshka dolls are sometimes incorrectly termed "babushka doll" (grandmother doll) in English. The origin of this misconception is uncertain, and there is no equivalent in the Russian language.

Matryoshkas date from 1890, and are said to have been inspired by souvenir dolls from Japan. The concept of nested objects was familiar in Russia at that time, having been applied to carved wooden apples and Easter eggs.
The first Russian nested doll set was carved by Vasiliy Zvezdochkin from a design by Sergei Maliutin, who was a folk crafts painter in the Abramtsevo estate of the Russian industrialist and patron of arts Savva Mamontov. The doll set was painted by Maliutin himself. Maliutin's design was inspired by a set of Japanese wooden dolls representing Shichi-fuku-jin, the Seven Gods of Fortune. Maluitin's doll set consisted of eight dolls -- the outermost was a girl holding a rooster, six inner dolls were girls, the fifth doll was a boy, and the innermost was a baby.
In 1900, Savva Mamontov's wife presented the dolls at the World Exhibition in Paris, and the toy earned a bronze medal. Soon after, matryoshki dolls were being made in several places in Russia.
from http://en.wikipedia.org/wiki/Matryoshka_doll
Alice
Posted by T2 at 5:20 AM