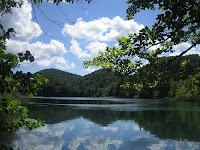 Plitvice Lakes National Park lies in the Plitvice plateau which is surrounded by three mountains part of the Dinaric Alps [1]: Plješevica mountain (Gornja Plješevica peak 1,640 m) and the Mala Kapela mountain (Seliški Vrh peak at 1,280 m) and Medveđak (884 m).
The national Park is underlain by karstic rock, mainly dolomite and limestone with associated lakes and caves, this has given rise to the most distinctive feature of the lakes.
//Lakes//
The lakes are separated by natural dams of travertine, which is deposited by the action of moss, algae and bacteria. The encrusted plants and bacteria accumulate on top of each other, forming travertine barriers which grow at the rate of about 1 cm per year.
The sixteen lakes are separated into an upper and lower cluster formed by runoff from the mountains, descending from an altitude of 636 m to 503 m over a distance of some eight km, aligned in a south-north direction. The lakes collectively cover an area of about two km², with the water exiting from the lowest lake to form the Korana River.
The lakes are renowned for their distinctive colours, ranging from azure to green, grey or blue. The colours change constantly depending on the quantity of minerals or organisms in the water and the angle of sunlight.