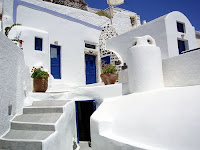 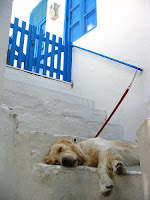 In Parikia town, houses are built and decorated in the traditional Cycladic style with flat roofs, whitewash walls and blue-painted doors and window frames and shutters. Shadowed by luxuriant vines, and surrounded by gardens of oranges and pomegranates, the houses give the town a picturesque and pleasing aspect. On a rock beside the sea are the remains of a medieval castle, built almost entirely of the marble remains of an ancient temple. Similar traces of antiquity, in the shape of bas-reliefs, inscriptions, columns, & etc., are numerous. On a rock shelf to the south are remains of a precinct which was dedicated to Asclepius. In addition, close to the modern harbour, the remains of an ancient cemetery are visible, since being discovered recently during non-archaeological excavations.
In Parikia's main square is the town's principal church, the Ekatontapiliani (literally: "church of the hundred doors"). Its oldest features almost certainly predate the adoption of Christianity as the state religion of the Roman Empire (391 AD). It is said to have been founded by the mother of the Roman Emperor Constantine the Great (ruled 306–337 AD), Saint Helen, during her pilgrimage to the Holy Land. There are two adjoining chapels, one of very early form, and also a baptistery with a cruciform font.
On the north side of the island is the bay of Naoussa (Naussa) or Agoussa, forming a safe and spacious harbour. In ancient times it was closed by a chain or boom. Another good harbour is that of Drios on the south-east side, where the Turkish fleet used to anchor on its annual voyage through the Aegean during the period of Ottoman rule over Paros (1537 - 1832).
The three villages of Dragoulas, Mármara and Tsipidos, situated on an open plain on the eastern side of the island, and rich in remains of antiquity, probably occupy the site of an ancient town. They are known together as the "villages of Kephalos" after the steep and lofty hill of Kephalos. On this hilltop stands the abandoned monastery of Agios Antonios (St. Anthony). Around it are the ruins of a medieval castle which belonged in the late Middle Ages to the Venetian noble family of the Venieri. They gallantly but vainly defended it against the Turkish admiral Barbarossa in 1537.
Parian marble, which is white and translucent (semi-transparent), with a coarse grain and a very beautiful texture, was the chief source of wealth for the island. The celebrated marble quarries lie on the northern side of the mountain anciently known as Marathi (afterwards Capresso), a little below a former convent of St Mina. The marble, which was exported from the 6th century BC onwards, was used by Praxiteles and other great Greek sculptors. It was obtained by means of subterranean quarries driven horizontally or at a descending angle into the rock. The marble thus quarried by lamplight was given the name of Lychnites, Lychneus (from lychnos, a lamp), or Lygdos.[15] Several of these tunnels are still to be seen. At the entrance to one of them is a bas-relief dedicated to Pan and the nymphs. Several attempts to work the marble have been made in modern times, but it has not been exported in any great quantities.
Parikia town has a small but interesting archaeological museum housing some of the many finds from sites in Paros. The best pieces, however, are in the Athens National Archaeological Museum. The Paros museum contains a fragment of the Parian Chronicle, a remarkable chronology of ancient Greece. Inscribed in marble, its entries give time elapsed between key events from the most distant past (1500 BC) down to 264 BC.[16]
by cathy / from wikipedia....
Posted by T2 at 2:48 AM